Arun got their new logo design by running a design contest:

We are an independent feature film production company specializing in intelligent entertainment-oriented genre films. We are looking for a logo that can be used on business cards/letterheads etc. and also on screen at the beginning or end of films.

Digitalis or Digitalis Entertainment International or DEI or dig.ital.is

We're looking for an all purpose logo that will draw attention to a small company in a crowded marketplace. We're just a startup now but are very ambitious and we would like to project an image that is professional, high-end and dependable, but also intriguing, classy and edgy. There are several elements that could be included in the design. The full name of the company is Digitalis Entertainment International Ltd. but you could build the logo around just Digitalis, or just the initials DEI, or just Digitalis Entertainment. We use the URL dig.ital.is for our domain so you might like to incorporate that into the design, or make it the main focus. Our mentality is as much inspired by tech startups as by conventional film companies so we don't mind something a bit "techie". We have local outposts in London, Los Angeles and Mumbai so you could also include those city names in the design.

- To be honest we don't really know anything about design, so please feel free to be creative and explore your own interpretation of the elements above. However, some possibilities we had thought about include: - Steampunk - something you might see as a label on a Victorian medicine bottle - possibly incorporating Moorish/Arts and Crafts/Arabic calligraphy type ornamentation. We have a placeholder site at dig.ital.is with an example of a possibility along these lines. We also like the logo of music publisher Edition Peters - http://www.editionpeters.com/home.php (logo at top right of page). For example you might do something like that but change the cities on the bottom line and use something inspired by stylized foxgloves for the fleurons around the banner. - Stripped down and corporate. If ornamentation doesn't appeal to you, you could try something very clean, simple and direct. - Minimal font. Something that doesn't have to be instantly legible but rather has a clever use of a small number of elements that can be deciphered by the viewer. - The color scheme can be inspired by the color region of foxgloves, although we prefer indigo/violet/lilac rather than mauve/pink. We prefer a limited color scheme but are interested by the possibility of metallic/chrome/gold elements.

- We prefer things clean, neat and tidy rather than a hand-drawn, scribbled or doodled look. - We prefer typography/fonts that connote "classy and expensive" rather than "zany and fun". - Don't really like loud or neon colors.

Arun collaborated with designers to refine their ideas

I need a badass logo for my trucking company

Age 16+ for both Men and Women location is suburban America

I photograph, film, film with drones, edit these, make websites.

www.megantaylormorrison.com -- I am not attached to any fonts, but you can use the fonts on the website if you feel insp

A logo that's gonna POP when seen and will be remembered and recognized.

We are an insurance agency. we target everyone. we sell auto, motorcycle, home, commercial, life, and specialty insuranc

9 Webflow tutorials for a beginner's guide to making a website 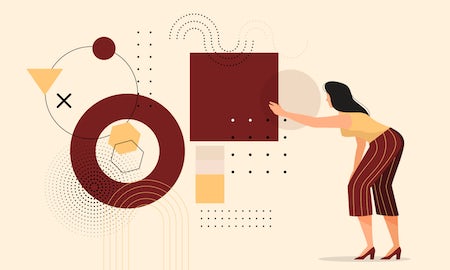 The meaning of shapes in design