Winning design by N A R R A
Completed contest

alphito_adnileb needed a new web page design and created a contest on 99designs.

A winner was selected from 40 designs submitted by 11 freelance designers. 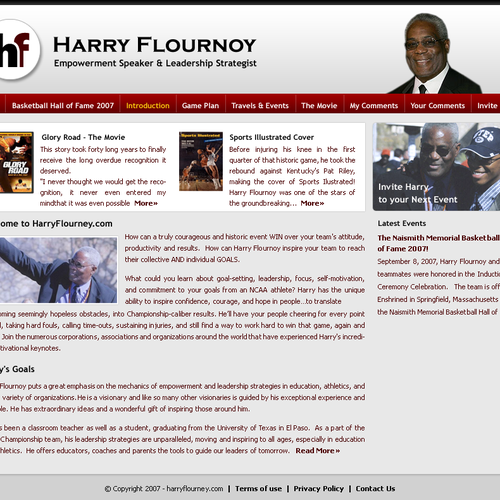 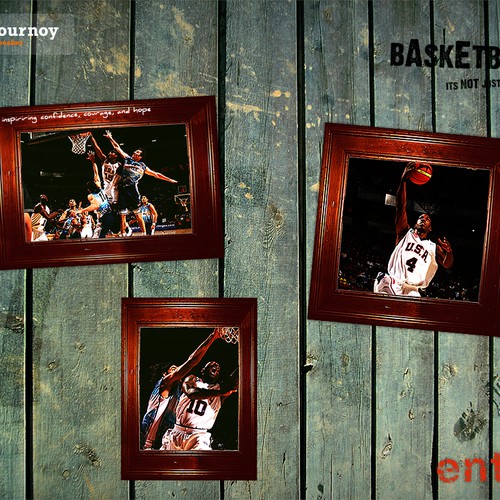 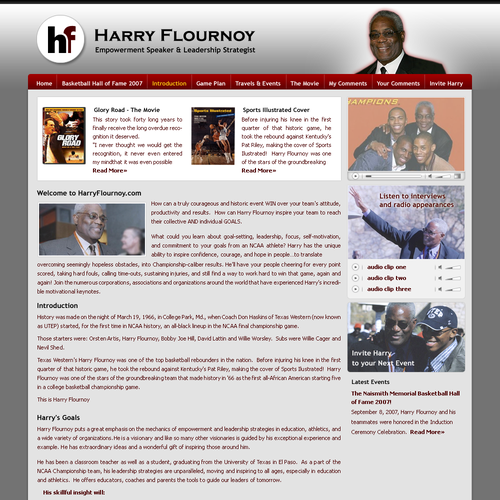 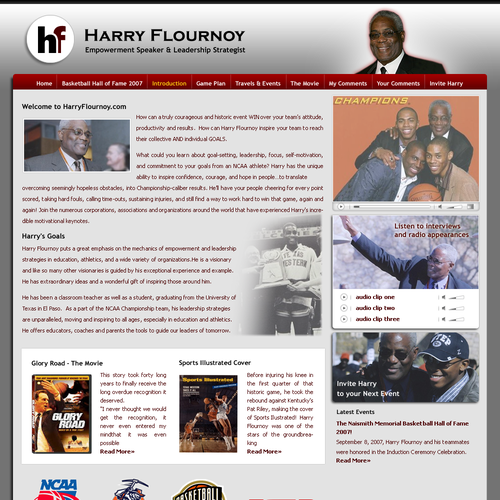 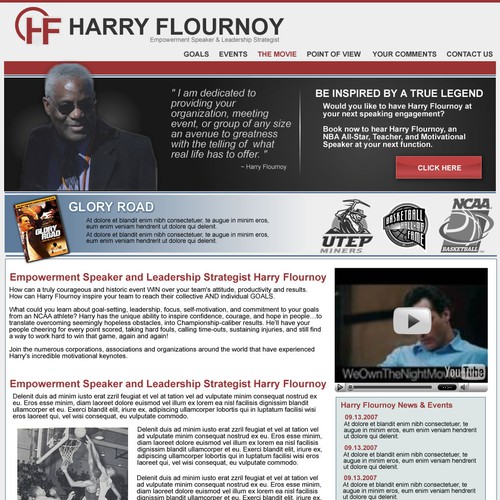 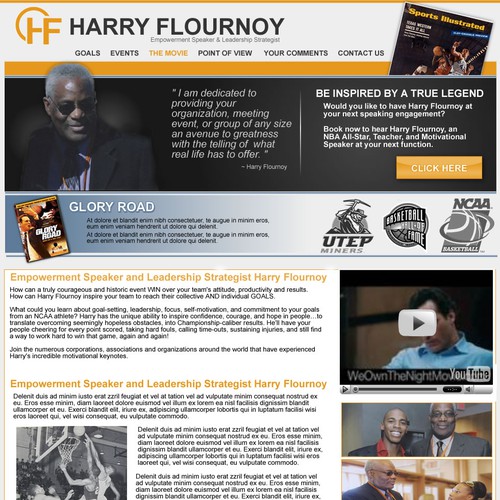 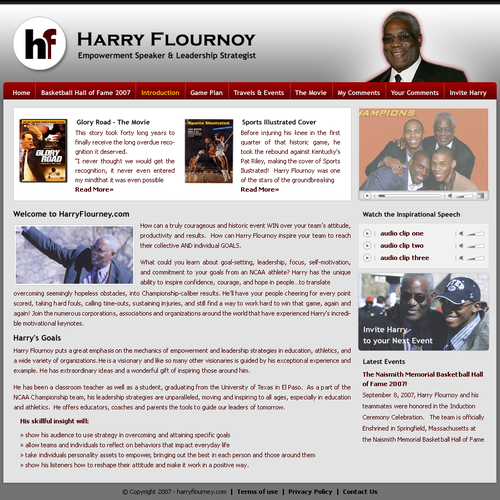 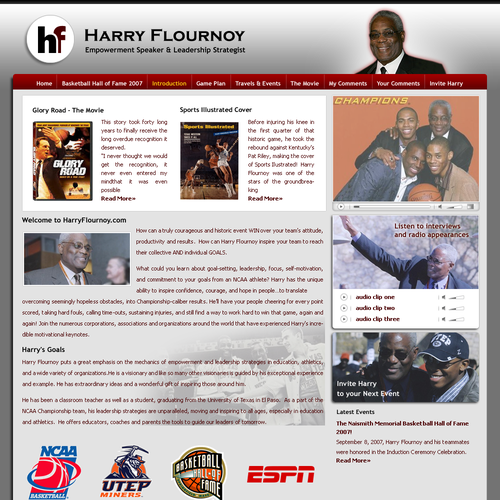 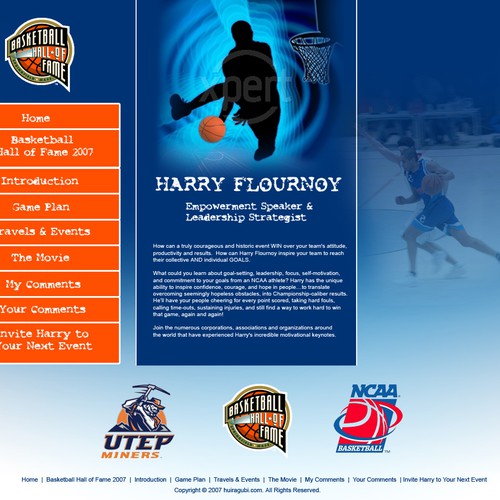 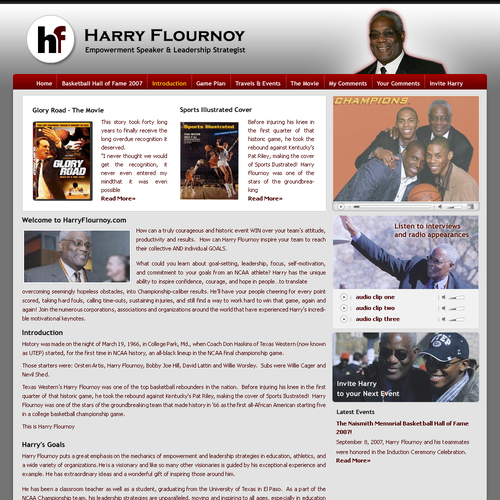 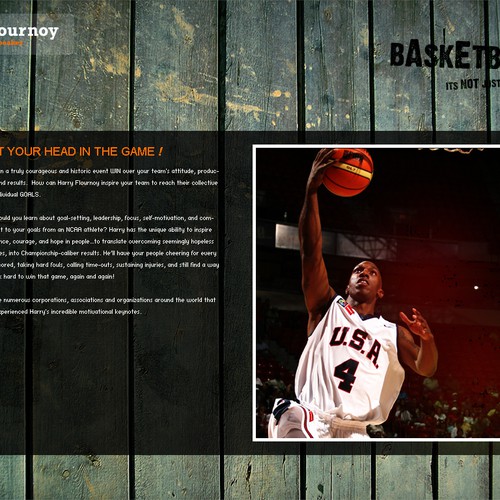 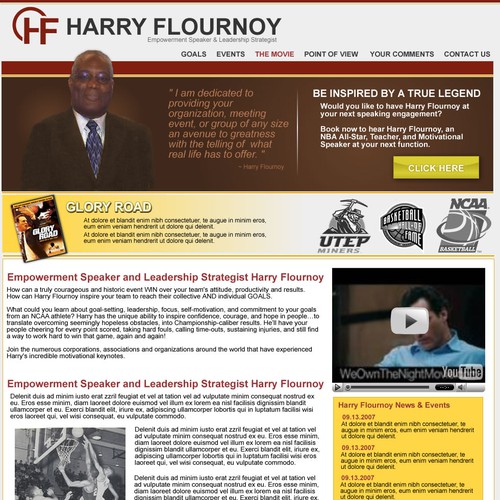 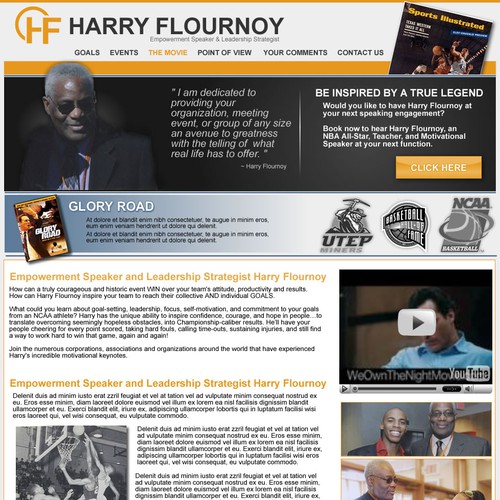 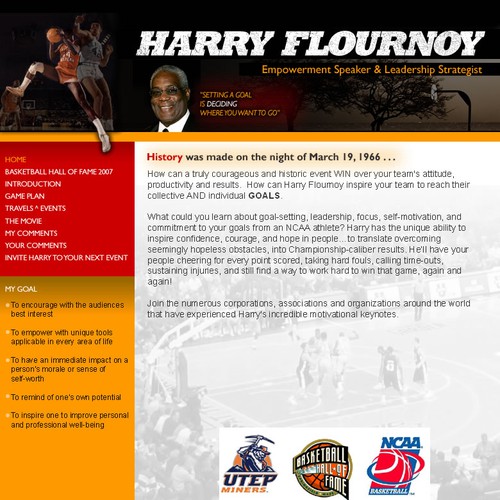 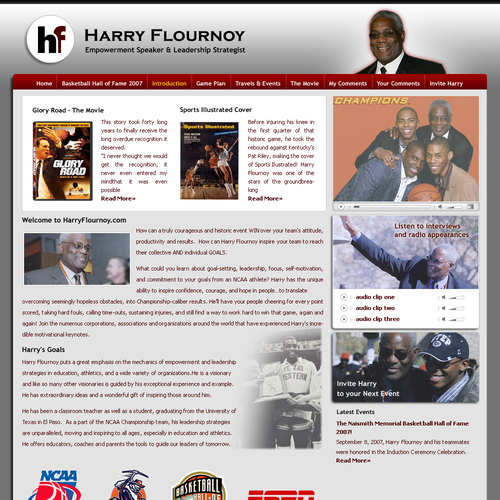 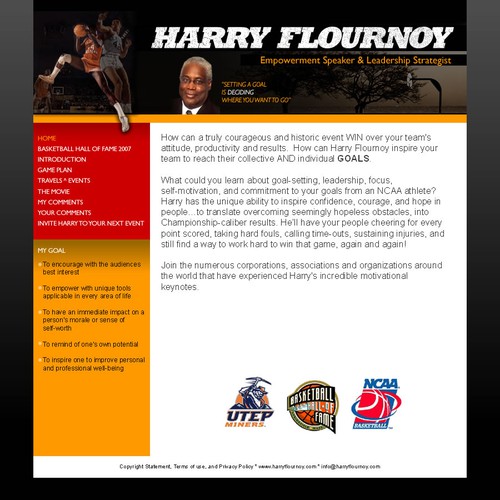 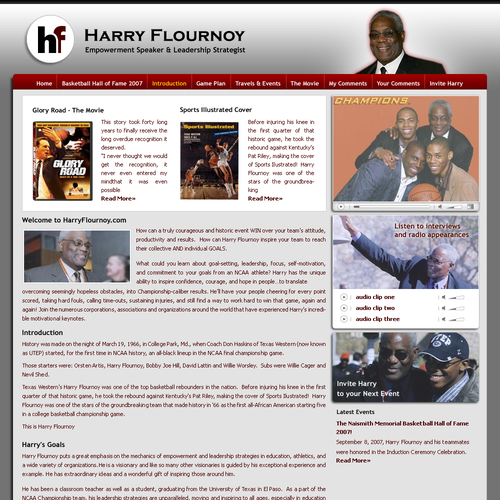 One of the designers who made it happen

Winner - N A R R A
Exactly what I was looking for, very quick to respond and make changes.
- mike24v

We are a site promoting Harry Flournoy for public appearances and speaking events. We want to target all organizations (businesses/corporate, military, educational, athletics & youth groups), not just basketball enthusiasts. He is a recent recipient of the 2007 Naismith Basketball Hall of Fame, NCAA Basketball Champion 1966, Cover of Sports Illustrated, ESPY Awards Winner for the movie â€œGlory Roadâ€. Our current site simple template provided by the web-host and it lacks anything fantastic or creative about it, so we're looking for something...fantastic and creative. Eye Catching. Your creativity would be appreciated.

Desired Color Scheme:
Open to ideas - colorful and creativity a BIG PLUS

Keep in mind, he is currently a motivational speaker and makes event appearances. We would like to see something artsy or a rustic design. Maybe something that shows a basketball stadium or we would be open with ultra classy and/or exquisitely modern. We would like to see as many styles as possible to determine a direction. We want interested visitors to feel compelled to contact us. The page should be bright and reflect Mr. Flournoyâ€™s maturity, so if you want to include young action figures, keep them small or to a minimum.

Referencing the movie Glory Road would be great as well as him on the cover of Sports Illustrated. He is a recipient of many awards and has been interviewed on several television and radio shows.

Awards include: NCAA Basketball Championship 1966, while at UTEP (Texas Western back then); ESPY Award Recipient for "Glory Road"; Basketball Hall of Fame Enshrinement 9/2007; on Cover of Sports Illustrated; Countless interviews and international speeches.

Currently his site is: http://www.harryflournoy.com where a template was used and not nearly as effective or attractive as we know designers here can produce. Another sample that was built could be seen at http://www.preipopicks.com. Perhaps browsing thru both websites and each link on the navigation bar to get ideas for a direction

Also, here is a link to some photos: http://www.harryflournoy.com/id19.htmlÂ

Advanced Search-based Consulting Website, Presented Simply and Beautifully!
$1,599
Delta is a consultancy that puts you and your company first and center of all of our practices, solutions, and culture.
301
entries
34
diseñadores
Website Design - Mobile App & Web Browser Testing Platform (Seetest.io)
$1,199
We have a cloud platform that allows developers, QA & test automation engineers test their mobile apps (and web apps) on
35
entries
14
designers
Motivational Speaker Needing Website Refresh
$1,599
I am a motivational speaker / content creator trying to inspire the world to live their best life. My videos have recei
87
entries
36
designers
Redesign a Online Giving Form for Church
US$599
We are a church and we want a to re-design of our online giving form.
63
entries
34
designers
Design a striking and bold site for a food startup
US$3,099
Full brief with asset links: https://docs.google.com/document/d/11Ws9mNIT1H5eZLjW5YnWDn_DFogb9tO_kL03YZVdNYU/edit?usp=sh
121
entries
32
designers
Design marketplace for scientists looking for lab services
$1,199
LABench online platform connects lab service providers and researchers requiring lab services. LABench is an open ma
119
entries
16
designers

We saved a spot for your web page design contest.

Get started now
Need a Creative, Unique Website Design For A Marketing Agency
US$599
We are a digital marketing agency that focuses on helping small professional service businesses grow.
77
entries
22
designers
Simple website to convince psychologists to co-work - brand provided
A$799
Union Co. is a co-working space that helps to make career & family life possible for Psychologists and Allied Health pro
89
entries
29
designers
Be the first to leave your mark on a future trillion dollar company website
£ 469
Micro is the simplest way to build microservices. We're creating building developer tools that massively reduces the com
48
entries
22
designers
Design Elegant Landing Page for World Class Spiritual Master
A$3,399
Authority Landing page as first point of information for Buddhist/Spiritual Master Angela Hryniuk Target leads of entre
60
entries
22
designers
Zeitcaster Event Listings
USD 2,949
Zeitcaster gives you the ability to discover local events based on your current location. You can also discover events i
72
entries
18
designers
ADA Compliance Website
$1,049
We assist organizations in determining website accessibility. We guide or provide development to the organization to get
83
entries
24
designers
Learn more about web page design
See how it works